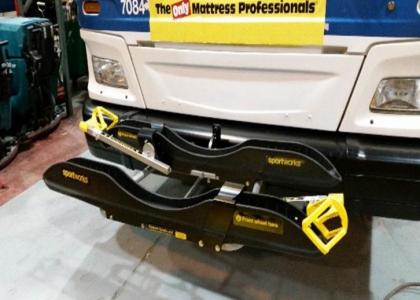 The yearlong Bike & Ride pilot will roll out on the S53 and S93 routes, which run between Staten Island and the Bay Ridge section of Brooklyn over the Verrazzano-Narrows Bridge. The two lines were chosen for their safe access to current and planned bicycle paths, ridership and routes, which serve a major college campus where bicycling is a popular commuting option.

The Harbor Ring applauds the MTA’s efforts to introduce bicycle racks on the S53 & s93 bus routes. It is a welcome addition to the city’s growing infrastructure for both current and future cyclists. We are certain Bike & Ride will be a success, just as similar programs have been in cities all over the country that have long had bike racks as standard equipment across their vehicular fleets. However, one bus carrying two bicycles is by no means a solution for our city’s overwhelming transportation deficiencies. We continue our campaign urging the MTA to create separated bicycle and pedestrian pathways across the Verrazzano Bridge that would offer toll free connectivity between Brooklyn and Staten Island.