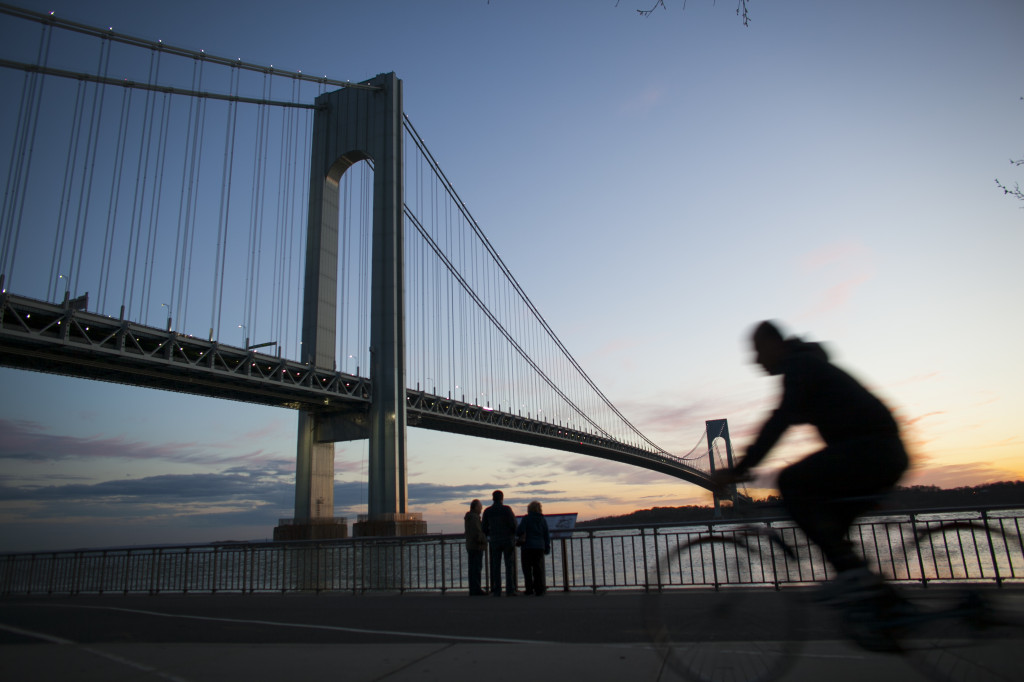 Originally completed in 1964, the Verrazzano Bridge is the main missing link in the Harbor Ring route. Cyclists and pedestrians are permitted to cross the bridge only twice a year, during the Five Boro Bike Tour and the New York City Marathon.

The bridge’s 225-foot-high, 4,260-foot-long center span is the longest in the Americas. The towers are seen from all five boroughs, and all cruise ships and large container ships calling at the Ports of New York and New Jersey (5,000 annually) pass under the bridge. The views from the bridge of New York Harbor, the Statue of Liberty, and downtown Manhattan are spectacular. Rivaled only by San Francis­co’s Golden Gate Bridge (which has pathways drawing thousands each day), New Yorkers and visitors should have access to this unequaled kaleidoscope of city, sea, and sky.

The Verrazzano was initially engineered to include pedestrian and bike pathways, which were never completed. In 1997, the firm that originally designed the bridge, Amman & Whitney, who also designed the George Washington, Whitestone, Triborough, and Williamsburg bridges, worked with the New York City Department of City Planning to release a report that analyzed the potential of adding the pathways to the bridge. That report highlighted four alternatives for adding the pathways that could be completed without limiting vehicle traffic over the bridge. The preferred alternative showed that the pathways could be constructed between the bridge’s suspender cables, similar to the pathway construction on the George Washington Bridge.

The Metropolitan Transportation Authority (MTA), which operates the bridge, recently announced plans to improve the Verrazzano Bridge by replacing the upper roadway deck, adding a High Occupancy Vehicle lane to the bridge, and redesigning the Brooklyn side approach. For a small cost increase, the project could include the construction of bicycle and pedestrian pathways on the bridge. There are many reasons why incorporating the pathways in the project would be a great idea and would benefit residents and visitors to New York City for years to come.

The Harbor Ring Committee has made significant progress advocating for a complete Verrazzano Bridge:

In honor of the bridge’s 50th anniversary in 2014, the MTA is taking meaningful steps forward to finally complete the bridge with pedestrian and bike pathways. The pathways would be the keystone of the Harbor Ring, and would have tremendous benefits for the region.

The Harbor Ring Project is supported by:

The Harbor Ring Committee is a partnership of organizations and individuals working collaboratively to promote bicycle and pedestrian infrastructure encircling New York Harbor, including the main missing link, a pathway across the Verrazano-Narrows Bridge. The Committee works with public and private groups and community members to complete the Harbor Ring, which will strengthen local economies, expand recreational opportunities, and encourage active living.